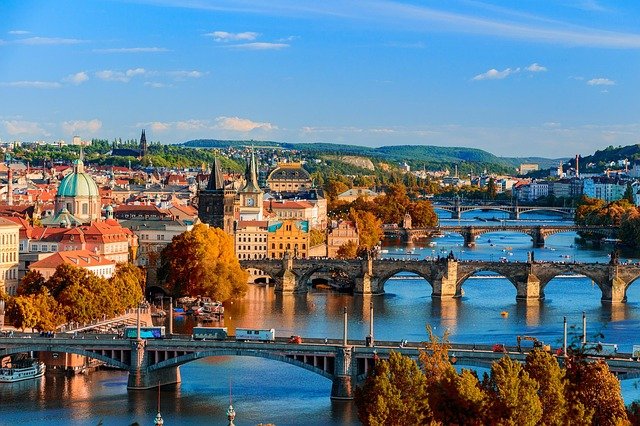 The Charles Bridge – Prague’s most iconic sight, is one of the most famous and beautiful spots in the city and a fascinating history hides behind its incredible architecture. Construction began on this famous Prague bridge in 1357 at the request of Charles IV, the King of Bohemia (and later Holy Roman Emperor) after whom the bridge is named.

About this famous Prague Bridge

The bridge is a spectacular example of Medieval European architecture and, as well as fulfilling its important purpose as the main crossing point on the Vltava River, is something of an artwork in itself – the bridge is decorated with thirty golden statues, each symbolising an important historical figure in the cultural life of the Czech people (most of which were originally erected around the year 1700, in the baroque style). Strolling along this iconic Prague bridge is a wonderful way to admire the city centre and if you’re lucky enough to catch it at sunrise or sunset, the views are indescribably beautiful.

Where is the Charles Bridge located in Prague?

The Charles Bridge is located right in the centre of Prague, a short walk from the old town. The bridge crosses the river Vltava (the historic lifeblood of the city and of central Europe’s most impressive waterways). As the city’s historic centre is built around this historically-important river and the oldest Prague bridge, you’re unlikely to ever be too far away.

How to get to Charles Bridge Prague

If you’re in the centre of town, it’s easiest to reach the bridge on foot. If you’re wishing to go to the bridge from your hotel or AirBnB that is a little further out, Prague has an excellent and well-priced public transport network. You can find out which bus, tram or metro that you need to take easily online – there are numerous options, all of which are pretty good value. Taxis are also reasonably priced but there is a bit of a reputation for taxis ripping off tourists who don’t know the city – Uber is available in Prague and a much more reliable way to get around without spending money unnecessarily. Knowing how to get to Charles Bridge, Prague old town or any other sights in the city is easy and the Czech capital is accessible 24 hours a day by public transport.

Questions? Text your free Personal Whatsapp Assistant
We serve cookies on this site to analyse traffic, remember your preferences, and optimise your experience.
By browsing our website, you agree to our use of cookies.OkSee more info